Baltic beauty: How to spend 4 days in Tallinn, Estonia

If Tallinn doesn’t immediately spring to mind when planning a long weekend getaway then I urge you to reconsider! I recently visited Tallinn for four days and even managed to squeeze in a day trip to Helsinki. From the moment I arrived I was totally swept up in the history and atmosphere of the city; merely wandering through the old town alleys felt anachronistic. Amongst the tightly cobbled streets, exquisitely painted houses and the steadfast and dominant towers and walls which surround the old part of the city; I was captivated. With beautiful architecture, phenomenal café culture and plenty of things to do, Tallinn is truly a destination to rival other more popular European cities.

Flights to Tallinn operate regularly out of London Heathrow with carriers such as Finnair, British Airways and Ryanair. The flight time to Tallinn from London is approximately 2 hours and 50 minutes, which is very reasonable if you are only planning to travel for the weekend. I would recommend getting a taxi from the airport. Our journey took about 15 minutes to the St Petersbourg Hotel in the centre of the old town and we were checked in and were ensconced by the fire with a brew in hand within 40 minutes of landing.

We stayed at the luxury Hotel St Petersbourg in the centre of the old town. This hotel is perfectly situated at 7 Rataskaevu which meant that all the main attractions were within easy walking distance during our stay. The hotel is charming and dates from the 14th century; it also boasts the title of the oldest working hotel in Tallinn. The décor is warm and cosy yet with a stylish edge which provided the perfect setting for our Late October trip. Roaring fires and hot beverages greeted us when we arrived in the pouring rain late on a Tuesday afternoon.

Our room was immaculate and incredibly comfortable. Although we didn’t spend much time at the hotel; the comfort and service we received during our stay is worth a mention.

Breakfast was included as part of our stay and it was an absolute treat each morning! Having chosen to visit at the end of October the hotel was quiet and we ate three of our four breakfasts just the two of us, it was blissful! The usual buffet fare was on offer and there was a menu option as well. We opted for the menu option as the chilly weather outside prompted more of a substantial start to the day. Each morning my omelette was cooked to perfection and the coffee was always piping hot and beautifully crafted.

16 Rataskaevu, this place is unreal! The food, the service, the atmosphere, wow! This absolute gem was directly opposite our hotel and was our first point of call after unpacking. Having not made a reservation for lunch I was dubious about our chances of snagging a table based on the impressive reviews I had read; but as luck would have it, they had one available.

After procuring drinks we were given freshly made rye bread and given the personal touch of how it was made and why it is different to other breads from the region. In short it was moist, melt in your mouth breaded yumminess….we ordered another plate!

Our starters and main courses were presented like works of art with flavours to match. We left feeling full and ready to explore the city.

The service we experienced, very reasonable prices and exceptional food, there is little surprise why comments such as ‘Best restaurant in Tallinn’ are attached to this place. I would thoroughly recommend making a reservation so you don’t loose an opportunity when in town. On our final day we thought we would try our luck again however this time they were fully booked; but within minutes the waiter had phoned their sister restaurant Väike, and secured us a table. 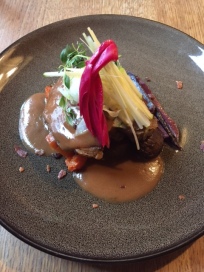 If I am ever short of a plan of action my go to decision is always coffee and a cake. I have

to say that during our four-day trip this plan was very well executed! Tallinn, I discovered has a wonderful café culture which I was not expecting. Tucked away into the recesses of the ancient walls is Café Carissimi, we made th

an a few stops here during our trip. The coffee was presented like miniature caffeinated works of art and the cakes and tray bakes were delicious! I can thoroughly recommend the marshmallow tart and the cappuccino.

No visit to Tallinn is complete without a hot beverage and something sweet at Café Maiasmokk, the oldest café in Estonia. This establishment is worth a visit to view the beautifully opulent marzipan room but also sample the sweet treats! I can recommend the Blackcurrant mousse cake….yummy! 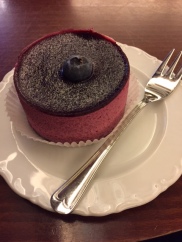 For any Game of Thrones fans a walk along the city walls is what I imagine it would feel like to wander round the battlements of Winterfell particularly as we visited on a very cold and blustery day. Touring the city walls and taking in the many towers which still remain from the medieval defences are a must when visiting Tallinn. Tallinn city walls are now a protected UNESCO world heritage site, this status does bring crowds however if you aim for late afternoon or early morning you should avoid the larger groups; leaving you free to get lost in a time long since passed.

Access to the passages can only be secured with a group tour ticket. Tickets can be purchased from the desk at Kiek in de Kök, the cannon tower.

The tour began with a short film explaining the evolution of Tallinn as a city and how it was often fought over and modified by the Danes, Germans, Russians and Swedes.

Going down into the tunnels felt as though you were descending into the depths of the earth, in reality you don’t actually go down that far! However, despite the relative shallow depth of the tunnels it is worth making sure you have a coat as it was pretty chilly down there!

As we wound our way through the myriad of tunnels each section had been well adapted to show how the passages were used during different periods of history. The bastion passages were a fabulous glimpse into

The Town Hall Pharmacy is a fun little jaunt and a nice way to spend 30 minutes before dashing off to catch your flight or make your tour time elsewhere. This pharmacy is claimed to be the oldest dispensing in Europe dating from 1422. The Raeapteek has been a cornerstone to the daily lives of the residents of Tallinn and the work which was carried out has helped to shape the Estonian pharmaceutical industry. The Raeapteek provides a detailed history into the ownership of the pharmacy and the types of work and medicines they

dispensed across the years. For those keen to explore more alternative remedies there is a price list and some very suspect items in jars showing the common goods to be prescribed in the middle ages. Burnt hedgehogs, dried deer penis, sun bleached dog faeces and stallion hooves were all popular medicinal options during the middle ages….I’m pretty glad that medicine has moved on….dried deer penis – no thanks!

We visited the Estonian History Museum on our last day and arrived early – our early arrival paid off, as we were leaving a very large school group came in! It is worth bearing this in mind if you choose to visit outside of the school holidays. The museum was well put together and provided a well detailed account of the building and life in Estonia across the ages. The building itself if lovely and worth some time just taking in the architecture and craftsmanship. Entry to the museum costs €6 for adults and was well worth it as we spent a good 2 hours reading and taking in the information.

This cute little passage way is worth a wonder down and provides some excellent photo opportunities! Walking down St Catherine’s passage really does feel like you’ve stepped onto the set of Game of Thrones, it is a true medieval street complete with tombstones lining the walls and some lovely little artisan shops.

Museum of Occupation and Freedom

Having visited Prague only two months prior to my trip to Tallinn my head was already swimming with information about the Soviet occupation of this area and how life had been for everyday people under the Soviet regime. The Museum of Occupation and Freedom was exceptionally well put together, it was informative, sensitively displayed and generated real feeling for the many thousands of Estonians who were affected or lost their lives during the occupation. I would suggest that you leave at least two hours to take in each part of the exhibition and take the time to listen to each part. Having known nothing about the Soviet occupation of Eastern Europe it has been a sobering experience to learn so much in a relatively short space of time about a part of history which didn’t see these countries regain their independence until the 1991.

When my husband and I arrived at the KGB museum located inside Hotel Viru; we immediately and without foundation lowered our expectations. Our reaction was based on the hotel which seemed dated and full of overly touristy activities. First impressions can be deceiving! We had prior booked our tickets as you can only gain entry as part of a group tour, so I would advise booking in advance https://viru.ee/en

As we ascended to the top floor of the hotel it became clear that we were in for a treat and a glimpse back to life during Soviet occupation. Our guide was incredibly knowledgeable and had lived in Tallinn during the 1970’s and 80’s so knew about the history of Hotel Viru. As it turned out the hotel was a base for the KGB to observe foreign guests and employees. When the Soviet regime collapsed in 1991 the KGB vacated their ‘secret’ floor of Hotel Viru and much of what was left has been preserved today and turned into a museum.

The tour took around an hour and a half and it was so worth it! It was fascinating to see how established the organisation were in a seemingly average hotel and that even your dinner plate could be a listening device.

at the top of the Toompea and is worth a moment of your time. I would however, advise that you don’t carve out any significant time in your schedule for a visit to the cathedral. Whilst the building itself is spectacular from the outside, inside it is very similar to most orthodox churches and you are not allowed to take photos. Inside the cathedral was busy and there seemed to be an odd juxtaposition between tourists pursuing souvenirs and those genuinely visiting to worship or appreciate the architecture.

My short trip to Tallinn exceeded all my expectations and I am definitely keen for a return trip to explore outside of the city and see what the coast and national parks have to offer. If you are looking for a long weekend European city break then get booking Tallinn!

View all posts by takemefarandaway

3 thoughts on “Baltic Beauty: How to spend 4 days in Tallinn, Estonia”